I bought a table saw for $20 without a blade or a blade nut. Actual replacement blade nuts are special order items for most hardware stores. Turns out the thread is a 5/8″-18 UNF nut. Some hardware stores carry these, but it might be easier to find them as a lawn mower blade nut. Mine was less than $5 with Prime shipping: http://amzn.to/2b4hqrC

Some table saws have a left hand nut. You can tell because the motor would be on the right side of the saw.

I made a custom bracket to so I could use a dial indicator to more accurately level my 3D printer’s bed. Works great and is relatively simple to use. Check out the video to see how it’s mounted and how to use it.

I modeled and 3D printed a horizontal pen holder that can sit on a desk or hand from a wall. It’s designed with fountain pens in mind. 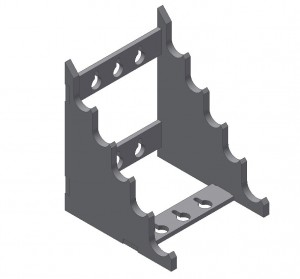 This LED work light stopped working when the driver chip let out the magic smoke. Getting a replacement wasn’t in the cards, so I added 2x 10W LEDs to it and a fan. Works a treat!

I bought this DW304P (DW304PK) saw from a pawn shop and decided to take it apart. Some people probably don’t realize this, but lots of tools are serviceable and require maintenance. I took this saw apart to add some new grease to the reciprocating mechanism and gears. This is also commonly done and angle grinders.

Here is the cheap moly grease I use for this sort of stuff: http://amzn.to/29i0AaB

I had a hard time pulling the spark plug caps off of my BMW R1150GS and ended up needing to make a simple tool to do it without damaging anything. It just takes a small bit of 1-1/2″ PVC and some relatively basic tools. I made a video that shows the process and use:

I had a lot of trouble bleeding the brakes on my 2001 BMW R1150GS recently. Turns out it’s mostly because I was looking at procedures for the newer R1150GS with ABS III. The older R1150GS has the ABS system from the R110GS (ABS II). Turns out bleeding this system is pretty straight forward. It can be done like most non-ABS systems. It’s a lot easier if you bleed from the ABS unit under the gas tank and then from the calipers. I used a vacuum pump to help get started. Bleeding by hand was still required, but I only had to pump the brakes a few times manually.

Here’s a video with some additional tips: https://youtu.be/WxG38nTWtPE

This is a basic example of controlling a stepper motor using an Arduino. I’ve coded from scratch a function that allows the motor to ramp up (accelerate) and ramp down (decelerate) based on a specified rate. The code uses the basic Arduino Stepper.h library. While other libraries have acceleration built in, this might be useful to some.

This ramping example could be used to control virtually anything using a PWM output and a solid state relay. Temperature is a common application of controlled ramping.

If you came here looking for my videos from The Colorado Mile (Sept. 4-6) then please visit my YouTube channel:

Another update to the 4cdl script. When archiving the webpage it will show the image thumbnail and fix the links to the downloaded images.

The page does not display completely, this is because of 4chan’s recent changes. I do not plan on preserving this formatting. The point of the program is to archive content.

Thanks to the people that bring these issues to my attention and give me reason to fix them. Cheers!